Around 10,000 Iranian health workers have been infected with coronavirus, the semi-official ILNA news agency has quoted the deputy health minister as saying.

“Around 10,000 health workers have been infected with the deadly disease in Iran and some of them have died,” Qassem Janbabai said, according to ILNA.

Indonesia has recorded its biggest daily jump in cases, bringing the total number of cases to 20,162 in the world’s fourth most populous country.

09:30 GMT – Japan may lift Tokyo state of emergency as early as next week: PM

Japanese Prime Minister Shinzo Abe has said that it was possible that a state of emergency in Tokyo and its surrounding regions could end as early as next week if the number of coronavirus infections continues to decrease.

“If the current situation continues, it is possible that the state of emergency could be lifted in those areas.”

Airlines should stick to ticket price guidelines issued by India’s civil aviation ministry when they restart some domestic flights, two months after air travel was halted due to the pandemic, the ministry has said.

Airlines should adhere to the lower and upper limits of fares set by the ministry, it said in a notice, but it did not give details on the amounts.

Airlines will be allowed to resume about a third of their operations from Monday, adhering to rules that include no meals on board, temperature checks for all passengers and full protective gear for crew, the ministry said.

In a bulletin, the ministry said total deaths because of the pandemic had increased to 846, while infections had risen to 13,434. But 68 more patients have recovered, bringing the total number of recoveries to 3,000.

UK healthcare workers will begin taking part in a University of Oxford-led international trial of two anti-malarial drugs to see if they can prevent COVID-19, including one US President Donald Trump says he has been taking.

The ‘COPCOV’ study will involve more than 40,000 frontline healthcare workers from Europe, Africa, Asia and South America to determine if chloroquine and hydroxychloroquine are effective in preventing the coronavirus.

The drugs have risen to prominence after Trump said earlier this week he was taking hydroxychloroquine as a preventive medicine against the virus despite medical warnings about its use.

Russia’s official coronavirus death toll has risen to 3,099 after officials said 127 people had died in the last 24 hours.

Russia’s authorities reported 8,849 new cases of the coronavirus, raising the total number of cases to 317,554.

Lufthansa is in advanced talks over a $9.9bn (9 billion euros) state bailout that would see Germany take a 20 percent stake in its flagship airline.

Lufthansa has said a deal would involve the government taking two seats on its supervisory board, but it would only exercise its full voting rights in exceptional circumstances, such as to protect the firm against a takeover.

Lufthansa has been in talks with Berlin for weeks over aid to help it cope with what is expected to be a protracted travel slump, but has been wrangling over how much control to yield in return for support. 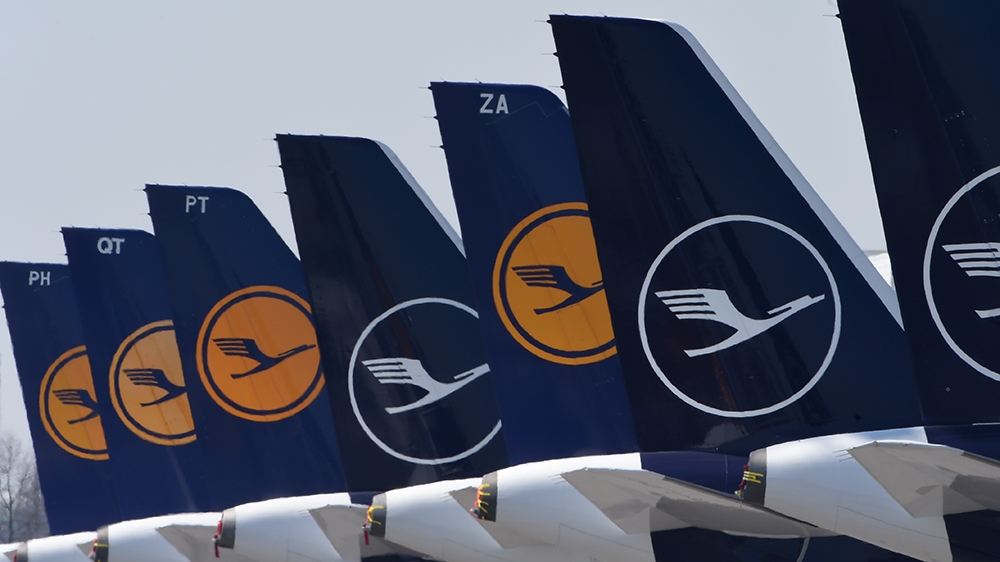 The UK is dealing with technical issues of its track and trace app, but will use traditional tracking means until it is rolled out, the security minister has said.

UK Prime Minister Boris Johnson said a “world-beating” programme to test and trace those suspected of having been in contact with people who have tested positive for COVID-19 would be in place by June 1.

The test and track programme is seen as a key measure to reopen the country, but has also been dogged by criticism after opposition lawmakers said an earlier promise of a nationwide roll-out of a National Health Service (NHS)-developed smartphone app had slipped from the middle of this month. 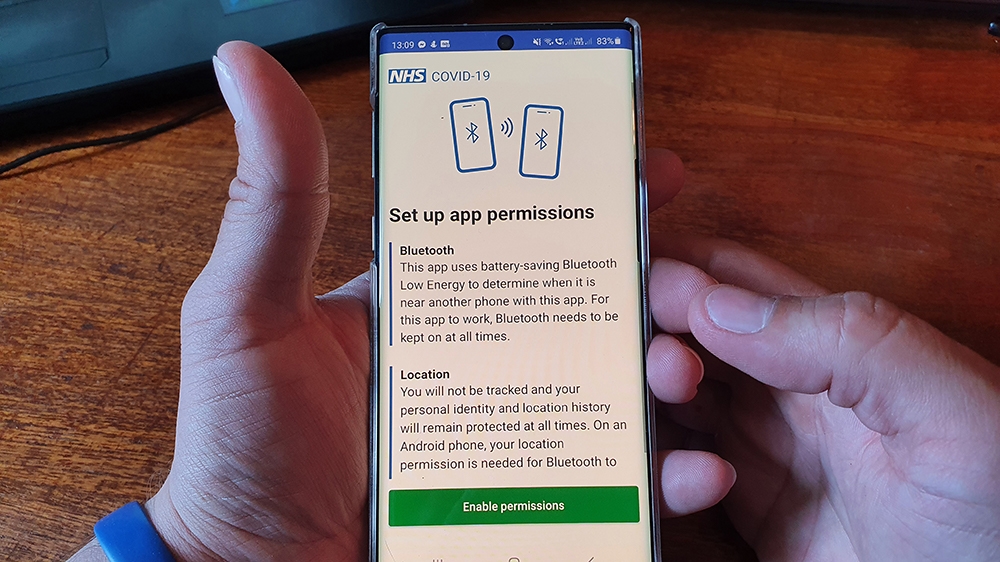 Singapore’s health ministry has confirmed another 448 coronavirus cases, taking the city-state’s tally of infections to 29,812.

07:00 GMT – EasyJet to restart flights in June with compulsory masks

British low-cost airline easyJet has said a small number of flights would restart on June 15 and that passengers and cabin crew would all be required to wear masks when travelling.

EasyJet’s planes have been grounded since late March when the coronavirus spread across Europe, but the airline said it would restart domestic flights in the UK and France from June 15, before adding other destinations later. 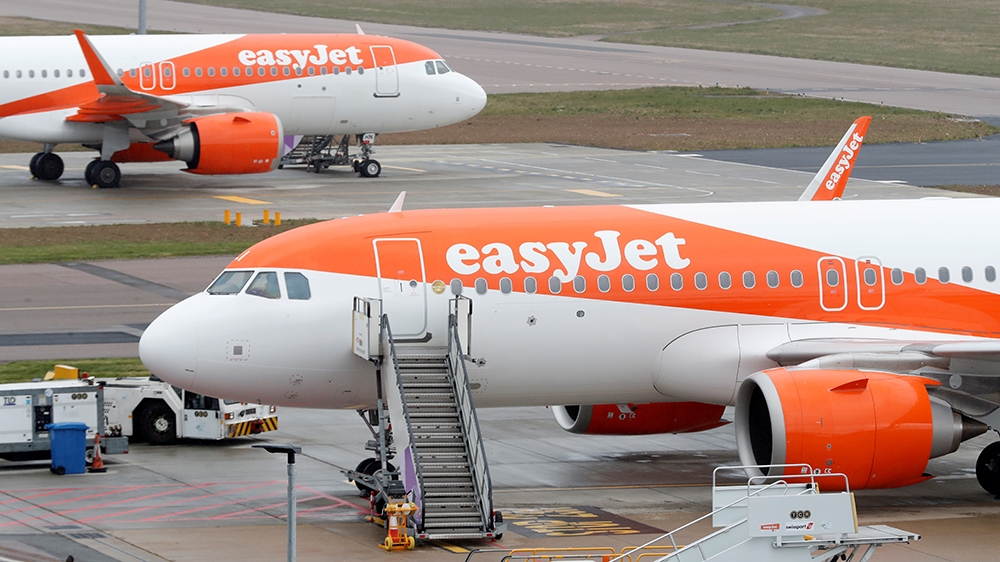 More than five million people have now been infected by the new coronavirus worldwide.

The landmark figure was reached almost five months after the first reported case in the Chinese city of Wuhan last December.

The US, Russia and Brazil have emerged as the countries with the highest number of confirmed cases.

Hi, this is Mersiha Gadzo in Doha taking over the live updates from my colleague Ted Regencia in Kuala Lumpur.

Civil groups in Indonesia have warned the government that it should not rush the easing of restrictions in the country, as the number of cases and deaths continue to rise.

Lapor COVID-19, a civil society alliance, was quoted by Jakarta Post as saying that fatalities among suspected coronavirus cases in 18 provinces have hit 3,833 as of May 15. Combined with the 1,242 deaths among confirmed cases as of May 20, the group said the total number of deaths was at least 5,075. 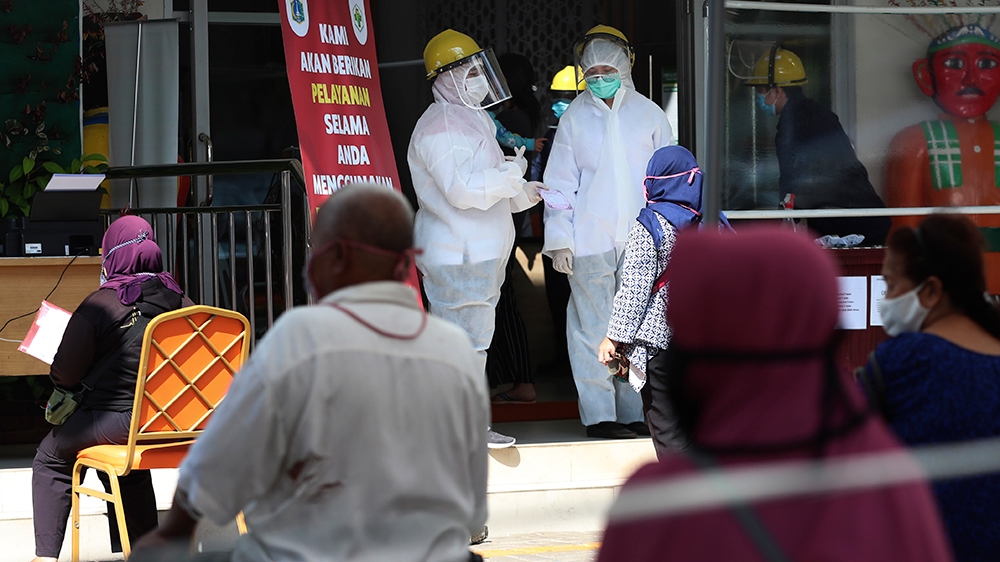 Staff in protective suits talk to a woman as people sit spaced apart to practice social distancing while waiting for their turn to enter a community health centre in Jakarta, Indonesia [Achmad Ibrahim/AP]

Greece’s long-awaited tourist season will begin on June 15 with the opening of seasonal hotels.

In a televised address to the nation on Wednesday, Mitsotakis says visitors would be subject to sample coronavirus testing and “our general health protocols will be adhered to”.

There are 2,850 cases and 166 deaths reported in the country of nearly 11 million people. 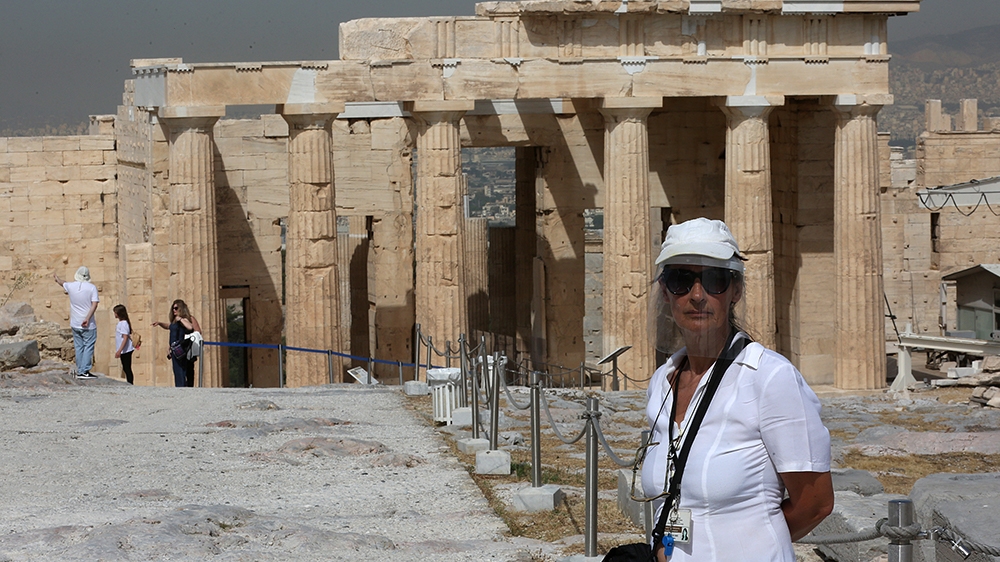 A guardian of antiquities stands on duty in the Acropolis archaeological site, in Athens, Greece [Orestis Panagiotou/EPA-EFE]

Japan’s economy minister says experts have approved a government plan to remove a coronavirus state of emergency in Osaka and two neighboring prefectures in the west where the infection is deemed to be slowing, while keeping the measure in place in the Tokyo region and Hokkaido.

Economy Minister Yasutoshi Nishimura told reporters that experts at the meeting approved the plan to lift the measure in Osaka, Kyoto and Hyogo.

The measure will be kept in place in Tokyo and three neighbouring prefectures, as well as Hokkaido, where the infections have slowed but the containment needs further improvement, according to the AP news agency report. 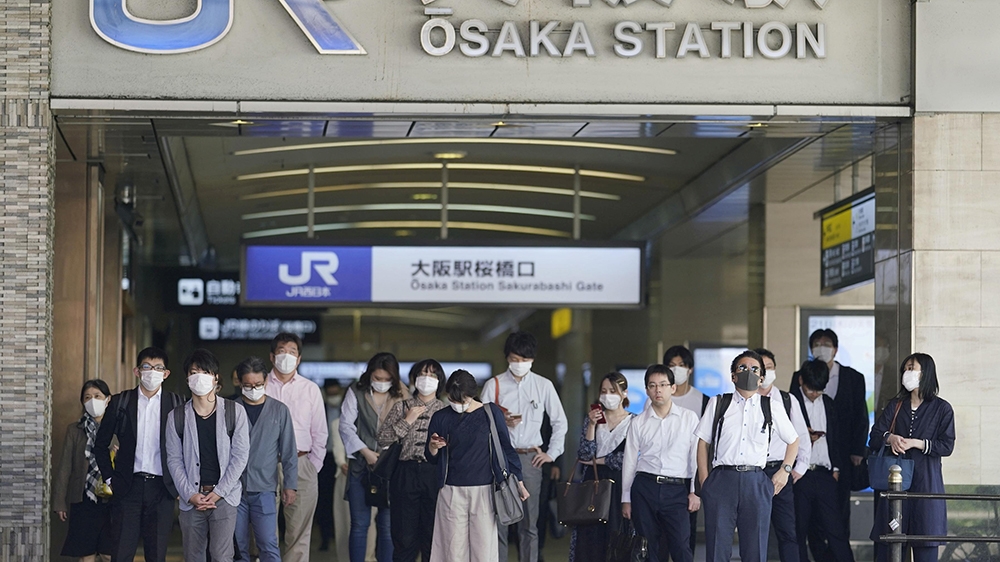 President Donald Trump has threatened to hold up federal funds for two election battleground states of Michigan and Nevada that are trying to make it easier and safer to vote during the coronavirus pandemic.

He later backed away from that threat but stuck with his unsupported claim that widespread voting by mail promotes “a lot of illegality”. The US Centers for Disease Control and Prevention recommends voting by mail as a safe option during the pandemic.

Trump has said repeatedly, without evidence, that mailed ballots allow widespread fraud and has worried publicly that wide availability could lead so many people to vote that Republicans would lose in November.

Cambodia has announced the lifting of a travel ban of tourists from Iran, Italy, Germany, Spain, France and the US.

In an announcement late on Wednesday, the country’s health ministry said visitors from those countries need to present a certificate no more than 72 hours old confirming that they are free from the virus, as well as proof of $50,000 health insurance coverage.

The visitors are also required to quarantine for 14 days upon arrival.

The drop in exports is the worst since the 2008 financial crisis, as export-dependent Japan struggles to juggle the health risks of COVID-19 with the dire need to keep the economy going.

Japan is in a technical recession after a contraction that began in the last quarter of last year deepened in the January-March quarter. Analysts say worse may be ahead, given the economic pain of the pandemic may be prolonged. 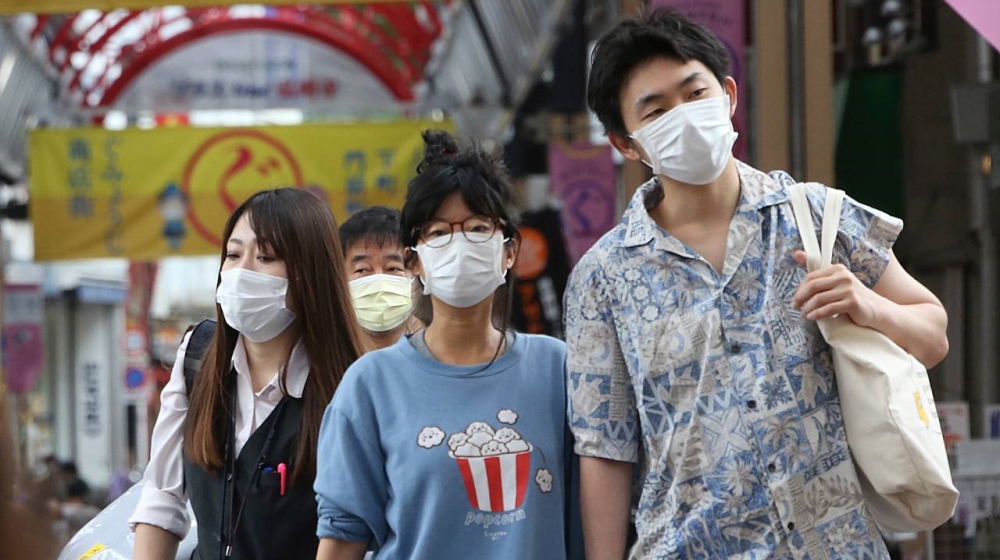 German Chancellor Angela Merkel says the country won’t be cutting foreign aid due to the coronavirus pandemic, and further relief for poor nations is needed.

Speaking on Wednesday after a video meeting with heads of the World Bank, the International Monetary fund and three other global economic bodies, Merkel noted last month’s agreement to freeze poor countries’ debt obligations and said that “as far as the sustainability of debt is concerned further steps need to follow”.

But she did not spell out whether Germany would go so far as agreeing to debt relief.

New Zealand’s prime minister wants employers to consider switching to a four-day work week as a way to promote tourism, which has been hard-hit by the coronavirus pandemic.

Jacinda Ardern said in a Facebook Live video that people had learned a lot about flexibility and working from home during the nation’s lockdown, which was eased last week.

New Zealand’s tourism industry had accounted for about 10 percent of the economy, but has ground to a halt during the outbreak, according to the Associated Press news agency.

The South Pacific nation’s borders remain closed, but Ardern said that as much as 60 percent of tourism was domestic and that more flexible working arrangements could allow New Zealanders to travel more within their own country.

Yonhap quoted the Ministry of Food and Drug Safety as saying that 72 test kits manufactured by 46 companies have been approved for exports. The figure includes six products that have won approval for emergency use locally.

Several test kit makers have already clinched more orders this year than last year’s total, with Sugentech Inc securing $49m worth of deals to export coronavirus test kits since April 1. The company has been producing two million kits per week this month. 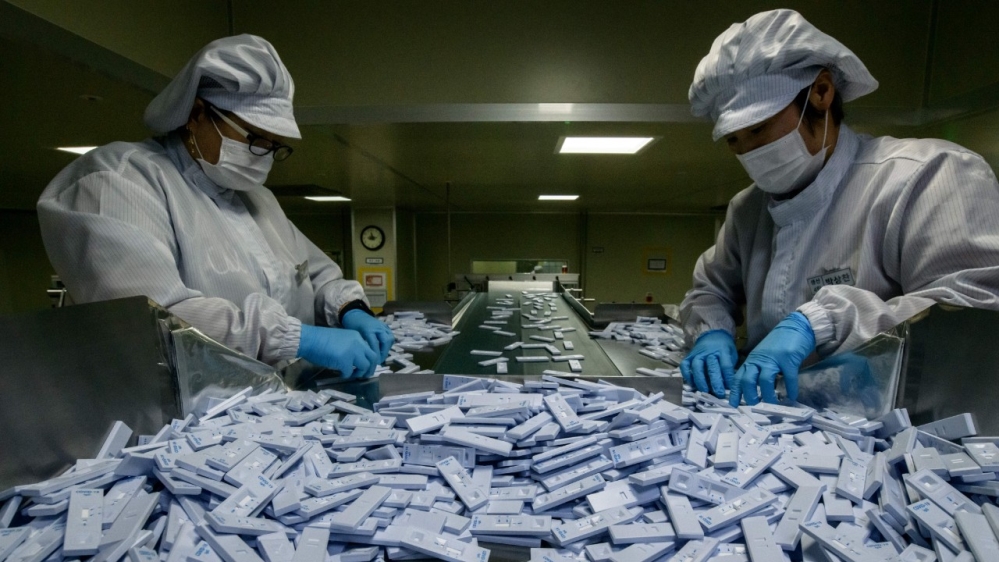 China’s health commission reported on Thursday two new coronavirus cases as of the end of Wednesday, including one imported case.

The health agency also reported 31 new asymptomatic cases in the mainland, slightly up from 16 the previous day.

The Russian military has set up a quarantine facility at a Siberian gold mine where hundreds of workers have been infected with the novel coronavirus.

The Olimpiada mine in the town of Yeruda has emerged as a top spot of contagion, with more than 800 workers testing positive for COVID-19. The new facility can accommodate as many as 2,000 patients.

Russia has ranked second behind the United States in the number of infections, with more than 300,000 coronavirus cases.

At least 500 Cuban health workers are helping tackle the new coronavirus in Mexico City, Mexican officials told Reuters news agency, making it likely the largest contingent the communist-led island has deployed globally as part of its response to the pandemic.

Mayor Claudia Sheinbaum has publicly acknowledged the presence of “several” Cuban doctors working in the city’s hospitals to help make up staffing shortfalls, but she has not confirmed the scale of the deployment.

A federal health ministry told Reuters there were now 600 Cuban health workers on the ground. Both sources asked not to be identified. Cuba has for decades sent medical professionals to countries across Latin America and as far afield as Africa to help during health crises.

Read all the updates from yesterday (May 20) here.