Here are the latest updates:

Mexico’s capital registered 8,072 more deaths in the first five months this year than the average from the same period over the previous four years, an analysis by independent researchers showed on Monday, suggesting a possible surge in fatalities to the coronavirus pandemic.

Health officials have reported 1,655 deaths from the virus in Mexico City, out of 7,394 deaths nationwide. They have also acknowledged that the true death toll is higher, but difficult to estimate because of the low testing rate.

Read more on the study here. 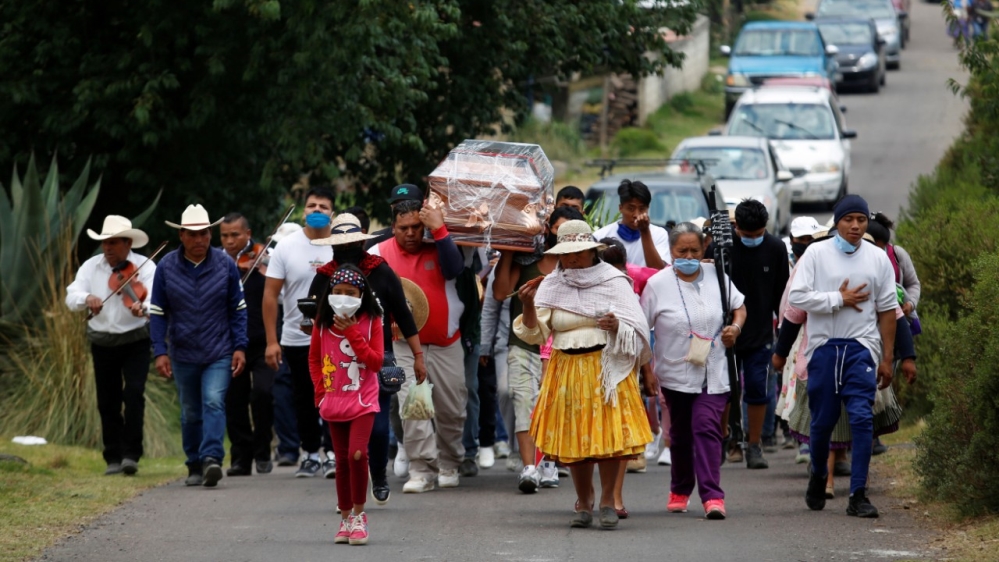 Mexico has been hard hit by the coronavirus [File: Gustavo Graf/Reuters]

Saudi Arabia will loosen its curfew for everywhere but Mecca from Thursday, according to the state news agency.

From May 31 to June 20, it will also allow prayers in mosques with the exception of Mecca. The curfew and restrictions on prayer there will be relaxed from June 21, it said.

South Koreans now have to wear masks whenever they use public transport or take taxis.

Health Ministry official Yoon Taeho says masks will also be required on all domestic and international flights from Wednesday.

South Korea was reporting 500 new cases every in early March before it largely stabilised its outbreak with aggressive tracking and testing. But infections have been rising slightly since early May, with more people going out during warmer weather and eased social distancing guidelines.

“Until treatments and vaccines are developed, we will never know when the COVID-19 crisis could end, and until then we will have to learn how to live with COVID-19,” Yoon said.

The World Health Organization (WHO) is warning that countries in which coronavirus appears to be in retreat could still face an “immediate second peak” if they let up too soon on measures to halt the outbreak.

WHO emergencies head Dr Mike Ryan told an online briefing that, while cases were declining in many countries, they were still increasing in Central and South America, South Asia and Africa.

Ryan said there was a chance infection rates could rise again more quickly if measures to halt the first wave were lifted too soon.

“We need to be cognizant of the fact that the disease can jump up at any time,” he said. “We cannot make assumptions that just because the disease is on the way down now it is going to keep going down and we are get a number of months to get ready for a second wave. We may get a second peak in this wave.”

He said countries in Europe and North America should “continue to put in place the public health and social measures, the surveillance measures, the testing measures and a comprehensive strategy to ensure that we continue on a downwards trajectory and we don’t have an immediate second peak.”

Read the updates from yesterday (May 25) here.

India Covid-19: How Modi could have stopped his country’s devastating crisis…