The US military accused Russia of deploying fighter aircraft to Libya “repainted to camouflage” their origin in support of mercenaries fighting for eastern-based commander Khalifa Haftar’s forces.

The allegation came as Russian Foreign Minister Sergey Lavrov on Tuesday told a Haftar ally that Moscow backed an immediate ceasefire and political talks that would culminate in united governing authorities.

The United States’ fighter jet accusation against Russia raises concerns of a new escalation in the nine-year-long conflict, despite Lavrov’s call for a truce.

“Russian military aircraft are likely to provide close air support and offensive fire,” the US Africa Command (Africom) said in a statement.

NEWS: Russia deploys military fighter aircraft to Libya
—–
“For too long, Russia has denied the full extent of its involvement in the ongoing Libyan conflict. Well, there is no denying it now.” – Gen. Townsend
Release: https://t.co/HpLdwUJxcr
Photos: https://t.co/raTal1LKPa pic.twitter.com/dVtsWKPYZ5

The US statement said the aircraft arrived in Libya “recently” from an airbase in Russia after briefly stopping in Syria, where they were repainted to conceal their Russian origin.

The Russian defence ministry said it would “not comment right now” on the Africom statement. But Andrei Krasov, a member of the defence committee in Russia’s lower house of parliament, dismissed the allegation as “fake” news.

On Wednesday, Vladimir Dzhabarov, first deputy head of the upper house’s international affairs committee, said Russia had not sent military personnel to Libya. Interfax news agency cited Dzhabarov as saying that the Russian upper house of parliament had not received a request to approve such a dispatch.

Moscow has long denied any involvement in Libya’s conflict.

The fighting in Libya has drawn in regional and global powers with what the United Nations described as a huge influx of weapons and fighters in repeated violation of a 2011 arms embargo.

Russia, the United Arab Emirates, and Egypt support Haftar’s self-styled Libyan National Army (LNA), which launched an offensive 13 months ago ago to seize the capital, Tripoli, from the the internationally recognised Government of National Accord (GNA).

However, in recent weeks the GNA has, with extensive Turkish military backing, pushed Haftar back from his foothold in southern Tripoli and other parts of the northwest.

Hundreds of Russian military contractors were reportedly evacuated into central Libya during the past few days after retreating from fighting on the capital’s front lines.

“Russia is clearly trying to tip the scales in its favour in Libya,” he said.

“Just like I saw them doing in Syria, they are expanding their military footprint in Africa using government-supported mercenary groups like Wagner,” he added, referencing the Russian private military contractor Wagner Group, which the UN said last month had 1,200 fighters in Libya.

The US statement said Russia had used Wagner “to conceal its direct role and to afford Moscow plausible deniability of its malign actions”. 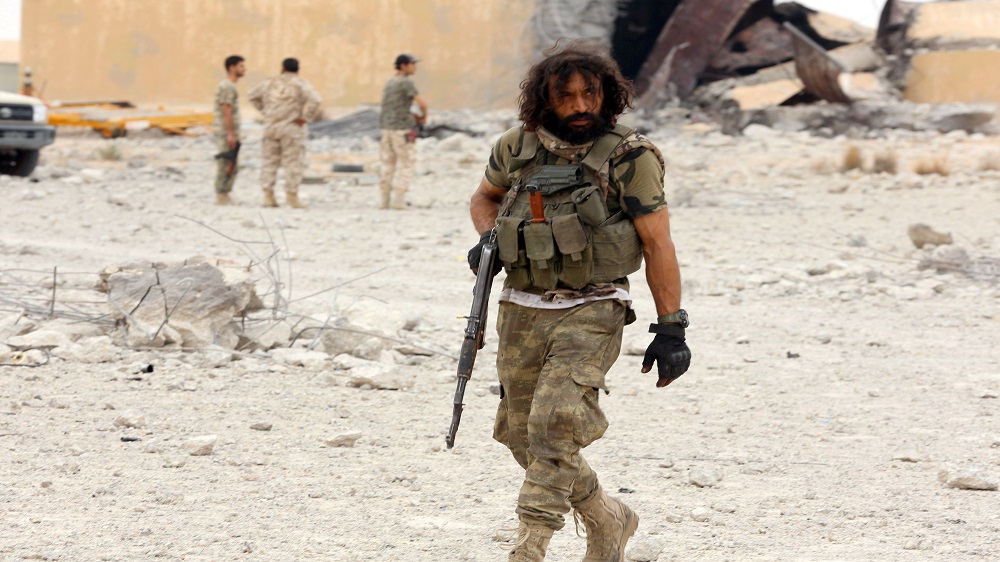 The statement added neither the LNA or foreign mercenaries would be able to “arm, operate and sustain these fighters [jets]” – without support from Russia.

Al Jazeera’s Mahmoud Abdelwahed in Tripoli reported people in the town of Bani Walid, a city 150km (93 miles) southeast of the capital, said 1,500 foreign “mercenaries” were now based there.

“The question now is whether they’re going to leave the country after the news they’re being re-deployed and provided advanced fighter jets,” he said.

Meanwhile, Russia’s foreign ministry said in a statement that Lavrov conveyed a message to Aguila Saleh Issa, speaker of the Libyan House of Representatives who is aligned Haftar, that he wanted an immediate ceasefire and political negotiations in Libya.

Analysts questioned the motive behind the Russian call for a truce and negotiations.

“Russia is on the back heel with Haftar and the recent military victories by the western-backed government, so it is advantageous for Russia to call for talks … which creates some space for retreat and re-positioning,” said William Lawrence, a professor at the American University in Washington, DC.

Mansour el-Kikhia, a professor at the University of Texas at San Antonio, said Lavrov’s call was disingenuous.

“The Russians have supplied aircraft all along under the guise of spare parts. Talk is cheap, ultimately what is the reality on the ground? They might withdrawal their forces, but their military hardware will get in one way or the other, directly or through Egypt or some other source,” el-Kikhia told Al Jazeera.

“It’s a zero-sum game. Neither the Russians nor the Turks are willing to give up their gains in Libya, nor the Egyptians either. I assure you if Haftar loses more territory than Egypt will intervene, too … It’s a catastrophe. This war is going to last another 15-20 years.”

The announcements came as the UN mission in Libya “strongly” condemned what it called the use of improvised explosive devices against civilians in the Libyan capital.

A statement released late on Monday voiced alarm about reports that residents of the Ain Zara and Salaheddin districts in southern Tripoli had been killed or wounded by IEDs placed in or near their homes.

The statement did not name who was believed responsible but came after the GNA on Monday accused Haftar’s forces of planting land mines in houses before pulling back from positions in the south of the capital, killing two civilians on Saturday as they returned home in Salaheddin.

“This grotesque transformation and deterioration of the conflict that has occurred while families were seeking the safety and comfort of their homes for the Eid holiday demonstrates deliberate targeting of innocent civilians,” the UN statement.

“These acts, which serve no military objective, provoke extreme fear among the population and violate the rights of innocent civilians who must be protected under international humanitarian law.”