Here are the latest updates:

Salvadoran President Nayib Bukele has for the second time vetoed emergency legislation passed to regulate the Central American country’s coronavirus policy and usher in a gradual reopening of its economy, his legal team said.

Bukele’s legal counsel, Conan Castro, said Bukele had vetoed the law backed on May 30 by Congress because it breached a number of constitutional guarantees including the rights and health of workers and cooperation between organs of government.

Castro was speaking to reporters at a news conference in San Salvador with other members of Bukele’s legal team.

Bukele, who has been at loggerheads with Congress for weeks over coronavirus policy, had vetoed a similar law in May on the grounds it put the public’s health at risk. He had said he would do the same with the law passed last weekend. El Salvador has about 2,934 coronavirus cases and 53 deaths reported.

China will increase international cooperation if it succeeds in developing a novel coronavirus vaccine, the science and technology minister said on Sunday.

China would make a vaccine a “global public good” when it is ready, the minister, Wang Zhigang, was quoted by Reuters news agency during a news conference in Beijing.

Brazil has removed from public view months of data on its COVID-19 epidemic, as President Jair Bolsonaro defended delays and changes to official record-keeping of the world’s second-largest coronavirus outbreak.

Brazil’s Health Ministry removed the data from a website that had documented the epidemic over time and by state and municipality.

The ministry also stopped giving a total count of confirmed cases, which have shot past 672,000 – more than
anywhere outside the United States – or a total death toll, which passed Italy this week, nearing 36,000 by Saturday.

“The cumulative data … does not reflect the moment the country is in,” Bolsonaro said on Twitter, citing a note from the ministry. “Other actions are underway to improve the reporting of cases and confirmation of diagnoses.”

Bolsonaro has played down the dangers of the pandemic, replaced medical experts in the Health Ministry with military officials and argued against state lockdowns to fight the virus, hobbling the country’s public health response.

South Korea has reported 57 additional cases of the coronavirus, marking a second day in a row that its daily jump is above 50 as authorities struggle to suppress a spike in fresh infections in the densely populated Seoul metropolitan area, the Associated Press news agency reported.

The figures released on Sunday by the Korea Centers for Disease Control and Prevention took the country’s total to 11,776 cases, with 273 deaths. The agency says 10,552 people have recovered while 951 remain in treatment.

South Korea’s caseload peaked in late February and early March but a later significant easing amid aggressive tracing, testing and treatment prompted authorities to loosen strict social distancing rules. The country has since seen an increase in new infections, mostly in the Seoul region.

Five of the new cases, recorded by late Saturday, involved travellers arriving from abroad, the National Health Commission (NHC) said on its website.

One locally transmitted case was found in the southern island province of Hainan.

The NHC also confirmed five new asymptomatic cases, or people who are infected with the virus but do not show symptoms, compared with two the previous day.

The total number of infections in China, where the virus first emerged late last year, stands at 83,036. With no new deaths reported, the death toll remained 4,634. 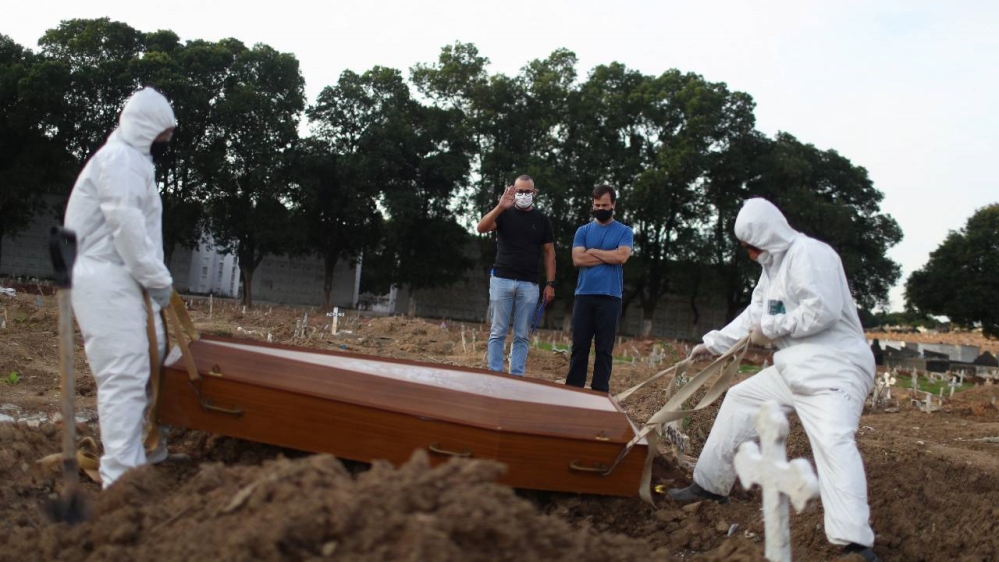 01:08 GMT – Sri Lanka to reopen for international tourism on August 1

Sri Lanka says it will be reopen for international tourists starting August 1 after a “successful containment” of the novel coronavirus.

The country’s airports had been closed since March because of the global pandemic.

Sri Lanka Tourism said in a statement on Saturday that all precautionary measures recommended by global health and travel authorities have been put in place to keep visitors and residents safe.

Mexico’s health ministry has reported 3,593 new confirmed cases of coronavirus infection and 341 additional fatalities, bringing the total in the country to 113,619 cases and 13,511 deaths.

The government has said the real number of infected people is likely significantly higher than the confirmed cases.

Russia has reported its second-highest one-day death toll from COVID-19 even as the number of new coronavirus infections remained steady.

The national coronavirus task force said 197 people died during the past day, sharply up from 144 a day earlier. The highest one-day death toll was 232 on May 29.

For all the updates from yesterday, June 6, click here.