Russia said Friday it was expelling diplomats from Sweden, Poland and Germany, accusing them of attending a rally in support of opposition leader Alexei Navalny, as international tensions grew over the jailing of the Kremlin’s most prominent foe.

The announcement came as the European Union’s foreign affairs chief Josep Borrell told Russian Foreign Minister Sergey Lavrov that the treatment of Navalny represents “a low point” in relations between Brussels and Moscow.

The Russian Foreign Ministry accused Swedish and Polish diplomats in St. Petersburg and a German diplomat in Moscow of taking part in what it called “unlawful” rallies on Jan. 23. Tens of thousands of people across Russia took to the streets that day to protest Navalny’s arrest.

The diplomats were declared “persona non grata” and were required to leave Russia “shortly,” a ministry statement said.

Condemnations from across Europe

Germany said its diplomat was fulfilling his duty by following the developments, and it warned Moscow that its action won’t go unanswered, summoning the Russian ambassador.

“We consider this expulsion unjustified and think it is another facet of the things that can be seen in Russia at the moment that are pretty far from the rule of law,” German Chancellor Angela Merkel said in Berlin after a video conference with French President Emmanuel Macron.

Macron expressed solidarity with Germany, Poland and Sweden and condemned “in the strongest terms” the expulsions and what happened to Navalny “from the beginning to the end.”

Sweden said it “considers this entirely unjustified, which we have also conveyed to the Russian side,” Foreign Ministry spokesperson Mats Samuelsson said in a statement to The Associated Press.

Stockholm “strongly rejects Russian claims that the diplomat took part in a demonstration in Russia” and “reserves the right to take appropriate measures in response,” he said.

The U.S. condemns the expulsion today of three European diplomats from Russia for observing the January protests. This arbitrary and unjustified act is Russia’s latest departure from its international obligations. We stand in solidarity with Germany, Poland, and Sweden.

U.S. Secretary of State Antony Blinken condemned the expulsion, tweeting: “This arbitrary and unjustified act is Russia’s latest departure from its international obligations.”

British Foreign Secretary Dominic Raab also said on Twitter that expelling diplomats “for simply doing their jobs is a crude attempt to distract from Russia’s targeting of opposition leaders, protesters and journalists.”

Speaking at the start of his talks with Lavrov, Borrell said “our relations are under a severe strain, and the Navalny case is a low point in our relations.”

Afterward, Borell said he had relayed his concerns over Navalny’s jailing and the arrests of thousands of who had rallied on his behalf. The EU official said he also communicated the bloc’s support for Navalny’s release and for an investigation of the August poisoning but added that there were no proposals of additional sanctions against Russia from the EU at this point.

I met with Foreign Minister Lavrov today to discuss EU – Russia relations, which are at the lowest point following the poisoning & imprisonment of Mr @navalny. In an open and frank debate, I requested an impartial investigation into the attempt against his life & his freedom – 1 pic.twitter.com/9gaB3X4sfk

Merkel said that “we reserve the right to continue the sanctions” but noted the Navalny situation shouldn’t affect the Nord Stream 2 pipeline under construction to deliver more Russian natural gas to Germany.

Lavrov again accused European officials of refusing to share evidence of the poisoning. The Kremlin has said it won’t listen to Western criticism of Navalny’s sentencing and police action against his supporters.

Navalny, 44, an anti-corruption investigator and Russian President Vladimir Putin’s most prominent critic, was arrested Jan. 17 upon returning from Germany, where he’d spent five months recovering from a nerve-agent poisoning that he blames on the Kremlin. Russian authorities have rejected the accusation.

On Tuesday, a Moscow court ruled that while in Germany, Navalny violated probation terms of his suspended sentence from a 2014 money-laundering conviction and ordered him to serve two years and eight months in prison. The ruling prompted international outrage.

In the mass protests across Russia’s 11 time zones for two weekends in a row, many people chanted slogans against Putin in the largest show of discontent in years. Thousands were detained. Several of Navalny’s close allies face criminal charges and are under house arrest, and many of his associates were handed short jail terms. 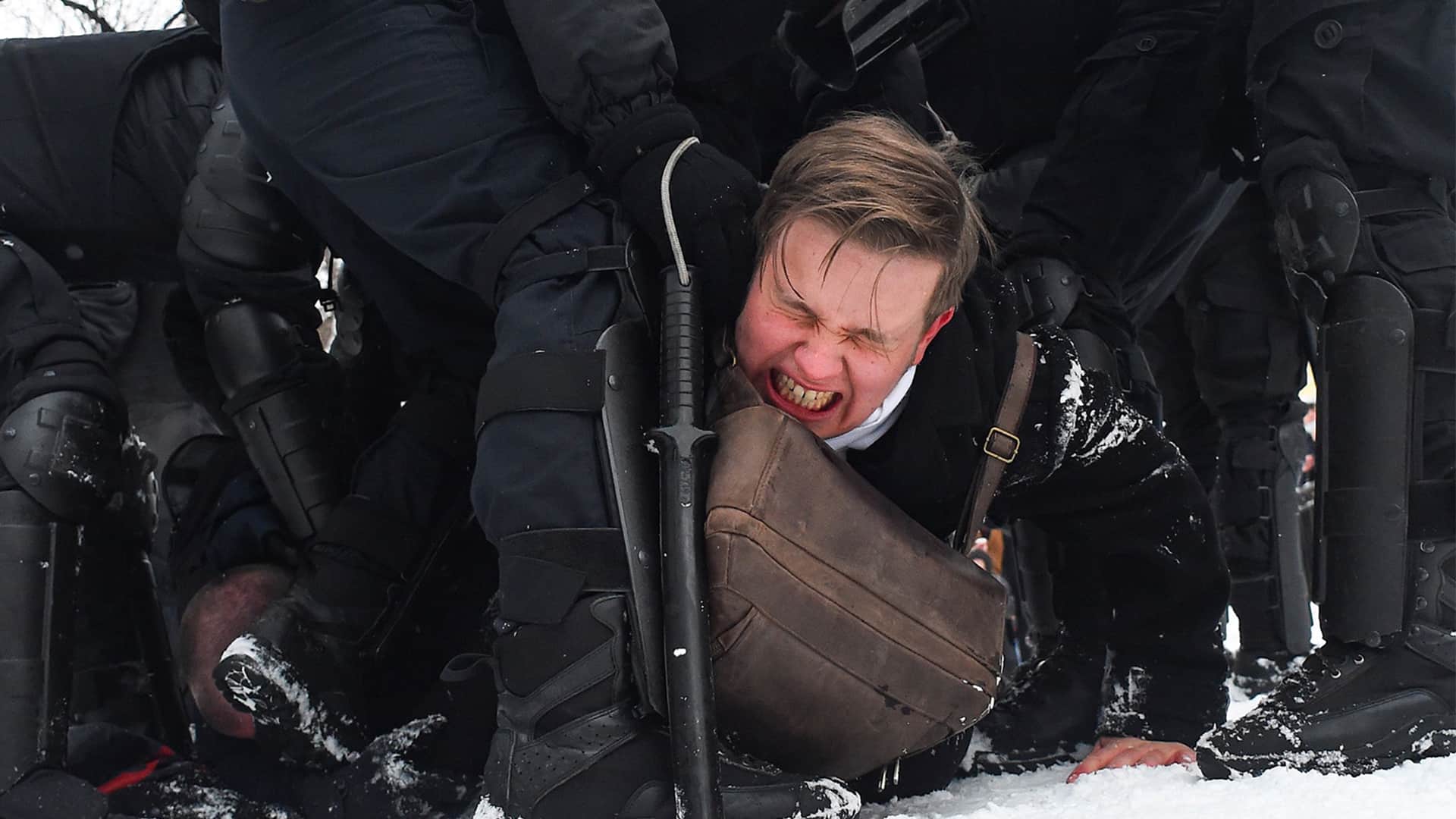 Russian police smothered Moscow with an oppressive show of force to try to snuff out protests organized by jailed anti-corruption crusader Alexei Navalny, but thousands showed up in cities across Russia anyways. 2:06

Top Navalny strategist Leonid Volkov argued Thursday that trying to maintain rallies every weekend would only lead to many more arrests and wear out the participants and said that protests should pause until spring after reaching a peak.

Instead, he urged supporters to focus on challenging Kremlin-backed candidates in September’s parliamentary elections and securing new Western sanctions against Russia to press for Navalny’s release. He said Navalny’s team would try to ensure that “every world leader would discuss nothing but Navalny’s release with Putin.”

On Friday, however, another Navalny ally, Vladimir Milov, expressed disappointment with Borrell’s visit to Moscow. He called it a “disastrously weak visit” and said Lavrov “used him as a decoration to lecture Europe on `international law.”‘

Navalny in court over accusations of slandering veteran

Navalny, meanwhile, was back in court Friday for yet another trial — this time on a charge of defaming a Second World War veteran featured in a pro-Kremlin video that Navalny denounced on social media last year.

A criminal probe was opened after Navalny slammed people featured in a video promoting constitutional amendments last year that allowed an extension to Putin’s rule. Navalny called the people in the video “corrupt stooges,” “people without conscience” and “traitors.”

Russian authorities maintained that Navalny’s comments “denigrate (the) honour and dignity” of Ignat Artemenko, the veteran featured in the video.

If convicted, Navalny faces a fine or community service. He has denied the charge and refused to enter a plea on Friday, calling the trial a “PR process” aimed at disparaging him.

“The Kremlin needs headlines (saying that) Navalny slandered a veteran,” he said.

Artemenko, 94, took part in the hearing via teleconference, saying he was distressed by Navalny’s comments and demanding a public apology.

Navalny accused Artemenko’s family of exploiting the frail man for their own gain, alleging the case was fabricated and the evidence falsified.

“The judge should burn in hell, and you’re selling your grandfather out,” Navalny said, as Artemenko’s grandson testified.

The hearing was eventually adjourned until Feb. 12.