Dozens of newspapers, TV stations and websites blank or black: this was what the national strike of private media in Poland protesting a sudden and crippling government tax on advertising looked like on Feb. 10.

In Hungary the same week, an opposition radio station was ordered by a court to turn off its microphones this coming Monday.

This is the politics of the slow squeeze in Central Europe. It’s a strategy designed by two men, the prime minister of Hungary, Viktor Orban, and the vice-premier and de facto leader of Poland, Jaroslaw Kaczynski.

Their countries, both former members of the Soviet bloc, belong to the European Union, and profit from it, but their ideas on democracy and the rule of law, principles their countries agreed to uphold when joining in 2004, are far from those endorsed by EU leaders in Brussels.

For Hungary’s Orban, democracy of the liberal kind is a dirty word. He has, instead, vowed to build an “illiberal state.”

“We have replaced a shipwrecked liberal democracy with a 21st-century Christian democracy, which guarantees people’s freedom and security,” Orban proclaimed to the Hungarian parliament in May 2018.

“Our task will be to turn against liberal internationalism,” he said.

Kaczynski is a devout Catholic but above all a devout Pole.

Late last year, the biggest chain of regional dailies and weeklies in Poland, with a reach of 17 million readers, was bought from a German publishing house by state-controlled petrochemical company PKN Orlen. On Feb. 4, Kaczynski explained that for two decades, the German-owned, or “non-Polish” as he prefers to put it, papers had been “demoralizing” Polish young people.

His government’s goal was “re-polonization,” and this was a shining example. Others see the deal as a Putin-style approach.

“The consolidation of the state, the oil sector and the media is a well-known manoeuvre in the Russian scenario,” Peter Wolodarski, editor-in-chief of the major Swedish paper Dagens Nyheter and of Polish origin himself, wrote in his paper late last year.

“This should be an alarm signal for the world.”

The politics of resentment

Kaczynski, 72, and Orbán, 57, are believers in nationalism and the politics of resentment.

Kaczynski’s view is that, in the years after communism crumbled more than 30 years ago, Poland’s liberal democratic leaders betrayed the country’s Christian principles.

He went on record in 2005 with this apocalyptic prediction: “the affirmation of homosexuality will lead to the downfall of civilization.”

When it won elections that year, his Law and Justice party promised a “moral revolution” to root out corruption and a so-called fourth republic, in league with the Catholic Church.

Orban, his country’s longest-serving prime minister, posted on Facebook last year a map of a pre-WWI “Greater Hungary.” The country was on the losing side of the First World War and stripped of about 70 per cent of its territory. Predictably, the post infuriated neighbouring countries.

Orban’s vision is of a Christian Hungary with no Muslim refugees, or “invaders” as he called them in a 2018 interview.

Both Orban and Kaczynski are nationalists who refuse the dreams of a more federal, multicultural Europe and brook little or no criticism of their vision.

And so, the strike and the radio station.

The sudden tax on advertising threatens the existence of independent Polish media outlets, their editors said.

“This is simply extortion,” they wrote in an open letter to the government on Feb. 10.

The Polish prime minister defended the tax as “a fair step,” saying the money raised would go toward fighting COVID-19 and would level the playing field between domestic and foreign players and small and big companies.

The editors said that Polish state media, filled with ruling-party loyalists, receive huge subsidies and would likely get more to offset the tax. The independent sector would receive none, they said.

The closure in Hungary of Klubradio is a slight departure from Orban’s previous strategy, which involved government allies buying up critical media. In 2019, Reporters Without Borders said the degree of media control under the Orban government was “unprecedented” among EU member states.

In the spring of 2020, a pro-Orban businessman took a 50 per cent stake in the firm that controls the advertising and revenue of Index, Hungary’s biggest news site. The editor-in-chief was soon under fire. Then he was gone. Seventy journalists resigned in protest. And Index is now a tame animal.

Klubradio’s licence, which expires Feb. 14, was not renewed last September by the government broadcasting authority for violating broadcasting rules on “six occasions in the last seven years,” according to the secretary of state for international communication and relations.

The station argued its infractions were minor and similar to those of other broadcasters that had not had their licences revoked.

The government has called allegations that the closure is part of a government crackdown on press freedom “a fiction” and part of the anti-Orbán agenda of the mainstream liberal media.

Klubrádió committed major infractions, violated basic regulations not once, not twice, but six times. But, of course, you are not going to hear about these violations from liberal media outlets, simply because it would not fit their anti-Orbán agenda. https://t.co/fzKCzMkXbb

In Poland, when the Law and Justice party took power in 2015, its first priority was to fill the top positions in state-financed TV and radio with loyalists.

The result was on display when tens of thousands of women demonstrated in October 2020 against a court ruling that struck down one of the few remaining exceptions to the near-total restriction on abortions.

The state TV channel TVP displayed a banner saying, “Leftist fascism is destroying Poland” on several occasions during its coverage of the demonstrations and opposition parties’ protests against the abortion law in parliament.

This bitterly contested ruling was the result of the alliance between the government of the majority Catholic country and the Catholic Church. But first, it required compliant judges.

So, soon after coming to power, the government brought in rules lowering the retirement age for judges, then replacing the departing ones with loyalists on the Constitutional Tribunal. They, in turn, handed down the abortion ruling.

Kaczynski’s government, which denies trying to influence the court, proceeds carefully.  After the massive demonstrations, it postponed bringing the abortion law into effect. Then, three months later, in the middle of a cold winter, it activated the ruling.

There were more nights of demonstrations by thousands of women, but there was a sense of frustration.

“This pause between the verdict and its coming into effect is typical of how they proceed,” one demonstrator named Ania told French daily Le Figaro. “They go slowly, and people get tired.”

It was another example of the slow squeeze. 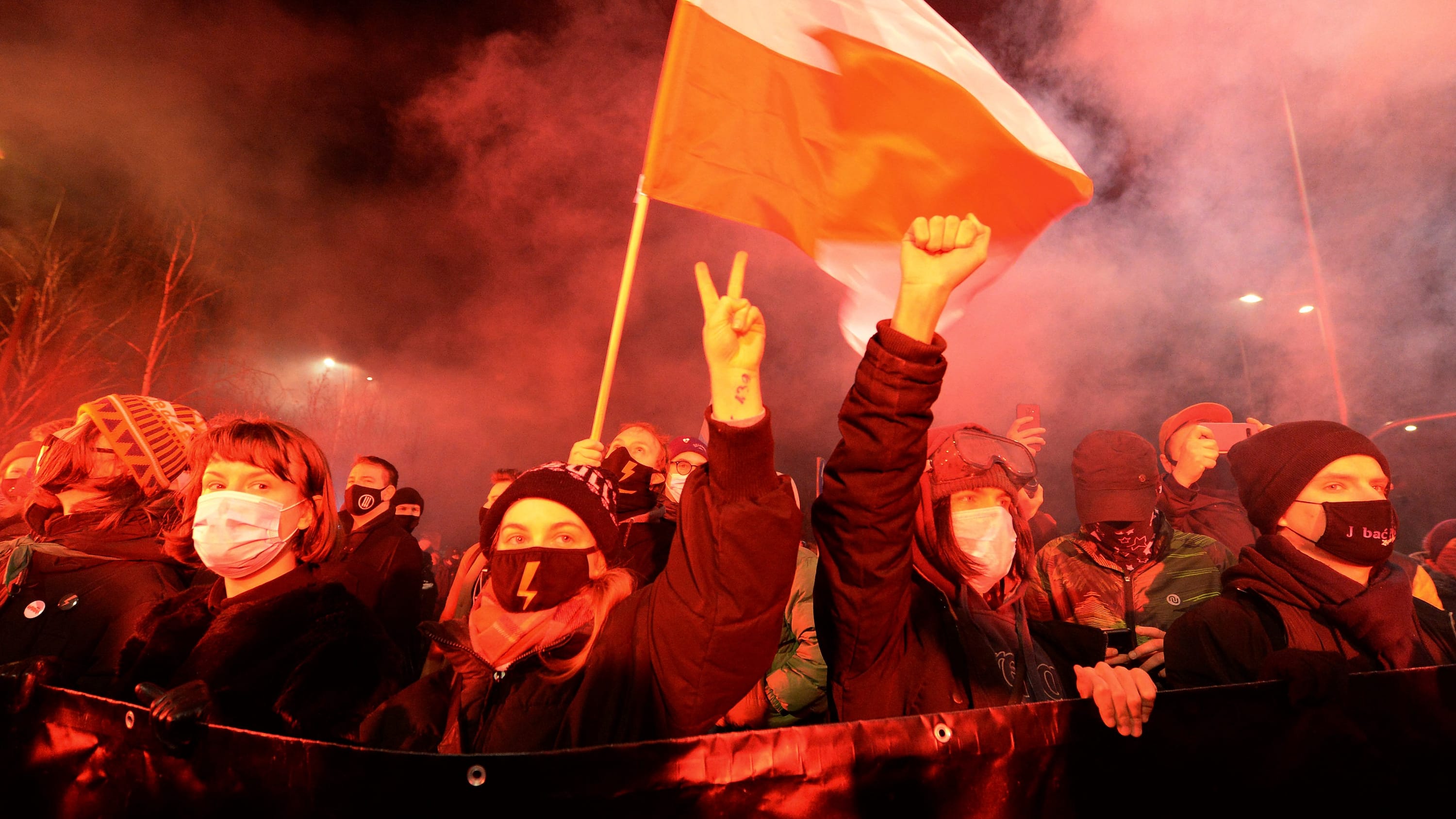 Thousands of people in Poland took to the streets after a new, highly restrictive abortion law came into effect. 0:46

Orban changed the retirement rules for judges as well, then also packed the courts with loyalists.

He then squeezed Central European University in Budapest, funded by Hungarian-American Jewish financier George Soros, a frequent target of Orban’s and the subject of various conspiracy theories and rhetoric widely decried as anti-Semitic.

The EU has tried to fight back, launching cases in the European Court of Justice and winning them. Hungary’s actions against Soros’s university were ruled illegal under EU law as was its forced early retirement of judges. Poland’s new retirement rules for judges were also deemed unconstitutional.

But the cases took several years. New judges were already in place in Poland and Hungary. The university had moved.

There are, however, worrying signs for both leaders. In Hungary, six opposition parties have united and polls show their coalition neck and neck with Orban’s party, Fidesz.

“Fidesz is gradually dropping, and this is mostly due to the virus’s economic impact and the perception that the government isn’t handling the crisis as well it should,” Tibor Zavecz, head of Zavecz Research, told BNN Bloomberg in December.

In Poland, support for the Law and Justice party has dropped from 47 per cent in May 2020 to 36 per cent in February, according to Politico’s poll of polls. Here, too, the pandemic has hurt.

But Orban doesn’t face an election until 2022 and Kaczynski not until 2023.

Until then, the work of the “moral revolution” in Poland and of “illiberal democracy” in Hungary will go on.

In Hong Kong, freedom of expression is shrinking fast | Freedom of the Press News

Families still suffering with separation, despite arrival of vaccines