The hunt for herd immunity: Suddenly, the U.S. seems in better shape on COVID-19


For the last year, stories about hard-hit American communities clobbered by COVID-19 served as a cautionary tale. Its worst-hit states like North Dakota, South Dakota, and Arizona evoked a mixture of pity and horror at an out-of-control pandemic.

The months of October and November remain a blur of never-ending work days for Rishi Seth, a Winnipeg-born doctor working the COVID-19 ward at the Sanford medical centre in Fargo, N.D.

Cases came crashing like a human tsunami into his hospital’s ever-expanding COVID-19 unit, which started on one floor, then expanded to another, and another.

“Call after call; hour after hour; every minute. Then our ERs were full. Then our walk-ins were full,” he said, recalling one particularly bad shift in late 2020.

He’d go home and think of patients like one farmer who realized he was dying. The man refused to be intubated, and said goodbye to his children, between gasps of air, through an iPad held up by Seth.

The dying patient told his children through the screen: “‘My time is up, I can’t fight anymore,'” Seth recalled. “He told them how much he loved them. He told them how proud he was.”

Things are different there now — and in many parts of the U.S.

Some experts believe parts of the country are now nearing those two magical words that could bring such relief, but at a great cost: Herd immunity.

Seth’s hospital was treating 116 patients with COVID-19 at one point late last year. It now has eight. Unlike last fall, the doctor is now enjoying downtime with his children; he’s even managing to watch his beloved Winnipeg Jets’ games.

Areas like his in the United States now offer a glimpse of a different, more hopeful, future, where there might, finally, be some light at the end of the tunnel.

Cases are falling, for various reasons, in lots of places around the world. They’re down about 70 per cent from the peak in Canada, and 75 per cent in the U.S., though they’ve nosedived with especially stunning speed, by more than 90 per cent, in the U.S. states hit hardest.

If growing immunity explains part of the drop, it’s been a bruising journey in the U.S., which is nearing a half-million people dead.

The U.S. has suffered three times more deaths than Canada per capita; its reported case count is four times higher; and, now, its vaccination rate is nearly five times higher.

Add those factors together and the U.S. finds itself in an unfamiliar spot: a big step closer to mass-immunization, and feeling more hopeful.

On the Crow Creek Sioux indigenous reserve in South Dakota, church pastor Rod Vaughn presided over nine funerals for members of his congregation killed by COVID-19.

Grief in the community was compounded as people were deprived of the chance to say goodbye in the normal way, with multi-day wakes; instead Vaughn was forced to hold services outdoors beside the grave with only family present.

It’s been weeks since the last such funeral. His county has now gone days without any new cases.

The pastor says he’s almost worried now to talk about hope. The pathogen has already bounced back before and he’s worried about it happening again.

But, right now, he says: “The community is hopeful…. I am hopeful … prayerfully, [that] this is the real deal this time.”

The math on herd immunity

The math on herd immunity is a moving target. There are varying estimates on where we are, what threshold will achieve it, and how the new, more transmissible variants might change the equation.

For an illustration of the first challenge, which is simply measuring the current immunity rate, take Vaughn’s area.

What we know about Buffalo County, S.D., is that federal data show 21 per cent of its residents have officially reported a case of COVID-19, which is the fourth-highest rate among the thousands of U.S. counties.

How widespread COVID-19 has been in some of the hardest-hit U.S. counties:

The true infection rate is higher.

Even with those uncertainties, Robert Kaplan thinks the hardest-hit parts of the U.S. are close to herd immunity.

Kaplan, a former associate director at the U.S. National Institutes of Health, now professor emeritus at UCLA, said in an interview that he calculated a handful of states had already surpassed a 55 per cent infection rate weeks ago — nearing a possible threshold for herd immunity.

“My gut feeling is they’re getting close [in the hardest-hit states].” But he cautioned that it will take a few weeks to see whether the new variant creates a higher threshold.

A colleague at Johns Hopkins University, Amesh Adalja, said the most-infected counties in the U.S. are likely at more than 60 per cent exposure to the virus.

The U.S. national number is likely around 30 per cent, Adalja said.

Both he and Kaplan said it’s already starting to pay dividends.

That’s because of another complicating factor when predicting herd immunity: setting a specific threshold where it is reached.

It’s not like a light switch where you suddenly turn off the virus at one point — but more like a dimmer whose effects become gradually more obvious.

“I do think there is probably some [effect already],” Adalja said.

Public-health experts tend to preface conversations about herd immunity with a host of warnings, driven by the desire to keep people from celebrating prematurely, tossing away their masks, and allowing those loathsome bugs to regroup.

The U.S. is, at best, halfway to the statistical end goal, though it’s not even clear what that end goal is.

Some initial estimates put the herd-immunity threshold for COVID-19 as low as 60 per cent, but Adalja said it’s probably at least 70 per cent, and it could even be 80 per cent, depending on how new strains respond to vaccines.

WATCH | Pandemic isn’t over yet, but normalcy is coming says Biden: 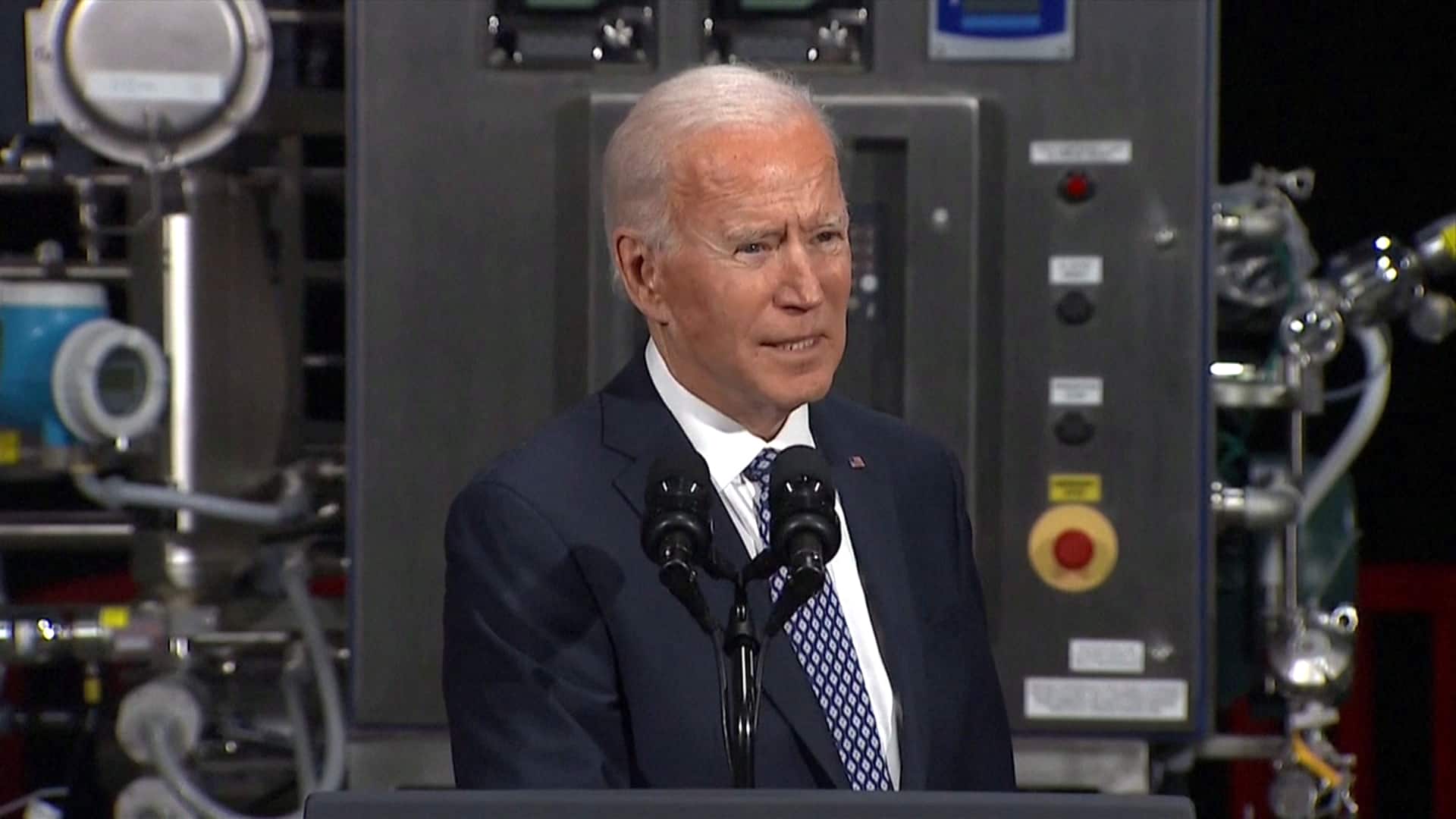 While touring a Pfizer vaccine plant in Michigan on Friday, U.S. President Joe Biden played down expectations of an immediate end to the coronavirus pandemic. But he said he hopes this year’s holiday season will approach normalcy. 0:29

As for those new variants, Kaplan said, we should know within about three weeks how big a problem they pose.

Kylie Hall at North Dakota State University’s Center for Immunization Research and Education said there’s clear progress but the U.S. is still less than halfway to the threshold.

“We’re quickly inching along,” she said.

“But for people to say we’re out of the woods is a little premature. … COVID is very much still a real threat.”

Then there’s the wildcard of human behaviour — such as how many people might refuse vaccines, which is another threat to immunity.

The three ‘I’s’ that got us here

Human behaviour, after all, has defined the faster virus trajectory in the U.S., with credit to the three ‘I’s’: Irresponsibility, inequality. and, now, ingenuity, with a historic vaccine rollout.

All three are exemplified in Lassen, California.

This county had the highest COVID-19 cases per-capita in the state, and has several prisons where inmates were hit hardest by this virus.

It also happens to be Donald Trump’s best-performing county in California and he got 75 per cent of the vote here.

Nearly 18 per cent of the people in this county reported having a case of COVID-19, far higher than the national average and almost 10 times Canada’s rate.

Many businesses and police forces in this stretch of California refused to enforce the state’s mask mandate.

The local Walmart even has a sign insisting customers wear masks and Hibbits would sometimes count the number of people ignoring it — nearly 80 on one visit.

The price that’s been paid

But that was a while ago, and Hibbits is feeling more optimistic these days, as the county’s case totals have dropped 90 per cent to just a few cases per day.

“I don’t want to get ahead of myself and get too excited,” he said. “But I’m very excited to see that there’s not [as many] cases.”

To get to this point, in this county of 30,000 people, more than 5,000 have reported getting sick with COVID, and more than 3,000 vaccine doses have been handed out.

That toll is worth keeping in mind over the next few months, says Hall, as the U.S. reaches herd immunity before Canada.

“At some point Canadians might look back and say, ‘We hunkered down for a year, but we saved lives. Grandma is still here for Christmas. We can still have our Canadian holidays with aunts and uncles’,” she said.

“That isn’t happening as often in the United States, because we have lost so many people. The United States might reach herd immunity faster. But our cost has been so great.”