De Vries was “on fire”, but Mercedes says it was “lucky” to win FE opener | Formula E…


Mercedes team principal Ian James has heralded first-time Formula E race winner Nyck de Vries as “on fire” in the Diriyah E-Prix but reckoned the manufacturer was “lucky” to win.

De Vries topped all sessions throughout the opening two days of the 2021 season opener – both practices, group qualifying and superpole – before leading every lap from the head of the pack.

He crossed the line 4.1 seconds clear of Venturi Racing driver Edoardo Mortara, racing with the Mercedes customer powertrain, to score back-to-back wins for the works team.

Last season, finishing 11th, an array of technical and procedural errors hit de Vries’ side of the garage more than team-mate and championship runner-up Stoffel Vandoorne.

But James conceded that the timing of the second safety car in Saudi Arabia, which nullified the attack mode just activated by Rene Rast – then running in second for Audi – had been “lucky”.

He told Autosport: “Nyck has just been on fire the whole weekend.

“If I look at the way we prepared and also executed things in the race, I put my hands up, we were lucky in a couple of situations with how things turned out during the safety car.

“But that’s with hindsight, with the information we had at the time, we did the right thing.

“I’m so pleased with the performance.”

James added that his team had chosen not to chase after lap time gains of only thousandths of a second, and that had allowed Mercedes to start the new season strongly. 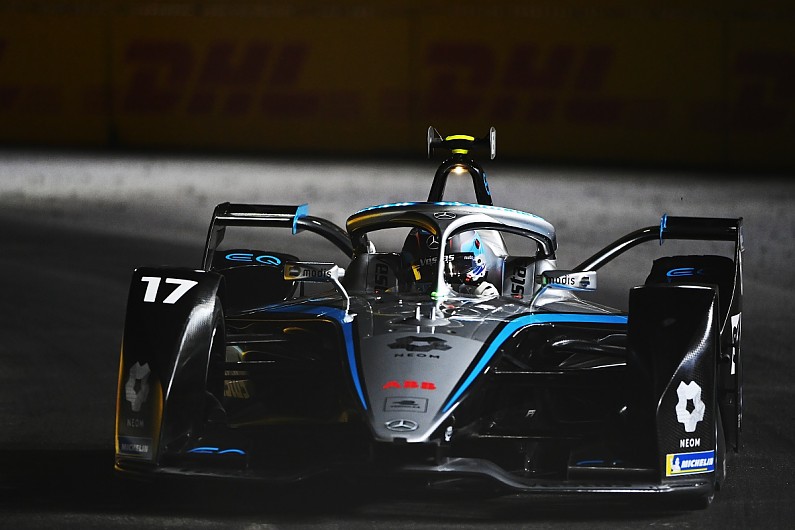 “Once we knew from the outset that we were in reasonable shape, we didn’t want to tear anything up and sort of start again, looking for those last thousandths.

“[We wanted] to keep a certain amount of stability and I’m glad that the team as a whole kept a cool head.

“That gave us consistency to be able to perform.”

De Vries told Autosport that he had been ‘surprised’ by his dominant performance.

He said: “Obviously we are here to win and that’s obviously our target and aim.

“From that perspective it’s not a surprise. But we are all aware of the challenges of Formula E and how difficult the championship is.

“In a way it was surprising to have such a strong day, basically from the beginning to the end.”

Over team radio, de Vries reported concerns that his Silver Arrow 02 machine was under- and then over-consuming, as Rast maintained a 1% useable energy advantage.

Explaining the issue, de Vries said: “It was a tough [race] to map because it wasn’t exactly clear what pace we were going to run so that has a consequence on the energy distribution across the 45 minutes.

“There was a lot of communication going on and quite a few safety cars to manage.

“I’m very pleased at this moment with this car. It was just a bit unclear what we were doing with our management but we changed it well and stayed calm.”