Gabriela DeBues-Stafford ready to ‘get back at it’ in 1,500m at Texas Qualifier


Gabriela DeBues-Stafford admits it felt “a bit weird” preparing to run an outdoor 1,500-metre race for the first time in 16 months.

But she’s fit and excited to be part of a talent-laden women’s field, which includes fellow Canadian Jenna Westaway, at Saturday’s Texas Qualifier after a six and a half week altitude training camp in Flagstaff, Ariz.

“It’s definitely different stakes [compared to] a world championship [race] but to get back at it will be fun,” said DeBues-Stafford, who hasn’t competed in the 1,500 distance outdoors since lowering her national record time to 3:56.12 at the 2019 worlds in Doha, Qatar.

“I don’t think [Saturday’s race] is going to be personal-best pace. It’s all about peaking appropriately and it is still only February, so people aren’t going to see me in tip-top shape quite yet, but they will in July [at the Tokyo Olympics].” 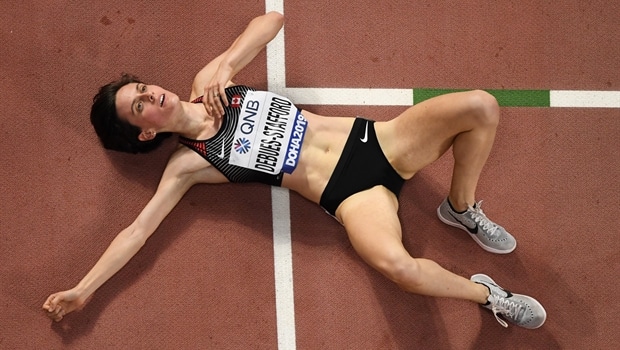 The Toronto native, fresh off a season world-leading 8:38.51 PB in the 3,000, had “a couple” of speed sessions in the fall but focused primarily on strength and endurance before travelling to Flagstaff.

“I was ready for that boost of being in a camp environment after doing the same loops [on the track] all the time. It’s nice to add some novelty into your training with different courses and scenery,” said DeBues-Stafford, the world’s No. 4-ranked women’s 1,500 runner who moved to Oregon last summer to join Portland-based Bowerman Track Club.

“The workouts got more intense [in Flagstaff] and I felt I got more serious about training, recovery and my [race] approach whereas the fall is more relaxed.”

Unfortunately, DeBues-Stafford was forced to shorten her runs early in camp while managing a flare-up of her right Achilles combined with plantar fasciitis, or heel pain, caused when the ligament that supports the arch of your foot is inflamed. She treated the injury with physiotherapy and massage.

DeBues-Stafford first dealt with plantar fasciitis in her freshman year at the University of Toronto in 2013, had right Achilles issues in 2016, a left Achilles problem two years later and Achilles soreness in January 2019.

“It evolved into more plantar pain that fall and got significantly worse [this past] fall,” she said. “When the Achilles flared up, the plantar followed and the root of the problem was similar, probably general calf weakness.”

Jacqueline Doorey speaks with Canadian middle distance runner Gabriela DeBues-Stafford to discuss the COVID-19 vaccine, how it can affect the Olympics, and whether athletes deserve to cut the line. 5:51

DeBues-Stafford isn’t concerned about suffering a potential setback this weekend after getting through recent high volume workouts unharmed while running in spiked shoes on the track.

“I was able to get it under control and it feels strong, the best it has in a year,” she said. “The big thing was focusing on my strength exercises in the gym to get the area stronger so it can take the training load.”

The 2019 Canadian silver medallist set national indoor records in the 800 and 1,000 in February 2019, breaking Melissa Bishop-Nriagu’s mark in the former and becoming the first Canadian woman to go sub-two minutes in 1:59.87.

Knight confident of achieving another PB

Knight returns to the track at 8:12 p.m. and believes a PB in the 1,500 is attainable two weeks after he clocked a 2021 world-leading 8:13.92 in the 2-mile race at the New Balance Indoor Grand Prix in Staten Island, N.Y., the second fastest all-time among Canadian men.

“The field is strong and the race should be fast enough. The most important thing is making sure I establish a solid position,” said the Toronto native, who ranks 11th in the world in the 5,000. “You have less room for error in the shorter races.”

Flanagan, Knight’s teammate with Reebok Boston Track Club since the fall of 2018, moves up to the 5,000 after a pair of 3,000 races earlier this month.

“I feel I’ve improved my overall strength and it’s allowed me to sustain a faster pace in the 5,000, but I don’t know what to expect this weekend,” said the former University of Michigan track star, who wants to qualify for Tokyo in the 5,000 and 10,000. “The field is stacked, the race is set up well to run fast and I’m excited to be part of it.”

Joining Flanagan in the 8:43 p.m. race is Lumb, a 22-year-old Vancouver native and University of British Columbia Thunderbirds standout. The electrical engineering major ran 13:43.36 on Dec. 5 in Burnaby, B.C., after clocking 13:40.51 at the 2019 Mt. SAC Relays in Torrance, Calif.

The former nationally ranked cross-country skier was fifth in the 5,000 at the 2019 Canadian championships.

The Calgary-born Linkletter is making his 2021 debut two months after placing 17th at The Marathon Project in Chandler, Ariz. In January 2020, the 24-year-old ran a 1:01:44 half marathon PB in Houston, only 16 seconds off Jeff Schiebler’s 1:01:28 Canadian record.

Science will lead the way on border reopening, U.S. secretary of state says